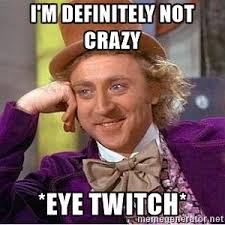 I have an eye twitch—have had for three days now. The lower lid on my right eye twitches for a couple of seconds every few minutes. It’s pretty much driving me crazy, so I did what any normal person would do—I Googled “common causes of an eye twitch.” Because, you know, Googling an ailment is almost the same as going to the doctor.

Anyway, here’s what I learned about the most common causes of an eye twitch:

Yeah, I guess I better make peace with the eye twitch. Looks like we might be close companions for a while.

[Update: as of the publication of this blog post, I’ve either gotten used to the twitching and don’t notice it as much, or it has calmed down considerably. And to think I almost cut back on my screen time!]

Have you ever had an ongoing eye twitch? How long did it last? What did you do about it?

What is your go-to stress reliever?

Any guesses at how much screen time you get on a typical day?