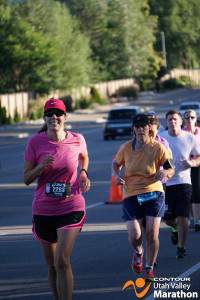 “Run when you can. Walk if you have to. Crawl when you must. Just never give up.” ~Dean Karnazes

I’m a runner. I’m a writer. These things might seem like they are on the opposite ends of the spectrum. One is sedentary, solitary, usually indoors in my comfy clothes, sipping coffee. The other is active, surrounded by others, preferably outdoors, in my sportswear, grabbing quick gulps of water, if I’m lucky.

Yet the two parts of me have much in common. Both release something from inside—an energy that needs to get out into the world. And both add something to me—an energy I need to be healthy. Running builds balance, muscle, cardio and heart strength. Writing also builds balance, mental muscle, helps me to breath and open my heart.

So what could be better, you ask, than writing about running? (If you didn’t actually ask that, just play along.) Today’s blog is a self-portrait of sorts, describing my first real running experience—the 2006 St. George Marathon.

“One step at at time,” she told herself. “Don’t think about it; just put one foot in front of the other.” But she couldn’t help but think about it. At her current pace, six more miles—or more precisely, 6.2—would take another 75 minutes; another 75 minutes and more than 12,000 steps. Twelve thousand steps with her toes pounding against the end of her high-performance Brooks shoes and sweat soaking the bottom of her firm control Moving Comfort sports bra, which was starting to chafe despite the vaseline she’d coated it with this morning.

What had she been thinking registering for a marathon at 45 years old? She was no athlete. Sure her long legs had grown muscular and tan over the months of training, but her stomach still pooched over the top of her shorts whenever she forgot to suck it in—which was most of the time—and her ample breasts were not made for running.

Her shoulders drooped under the weight of her exhaustion. The nervous adrenaline she had started the race with in the wee hours of the morning had evolved into a confident runner’s high around mile 6, then abandoned her at mile 17. She’d plodded through the last three miles on sheer determination. Now even that was faltering under the burning sun.

She slowed to a walk and runners pushed past her on both sides. “Let them pass,” she thought, mentally giving them the finger, while she smiled and moved politely to the outside edge of the road. She pinched her side and took a slow deep breath to stop the stitch that was forming. Another runner passed. Christie’s back ached, and her knees were stiffening. This had been a foolhardy adventure. Twelve weeks ago the farthest she’d ever run was the width of her yard, chasing the puppy with her grandchildren. Now she was attempting 26.2 miles. Who did she think she was?

“Stop,” she told herself. “You’re in it now, and there’s no turning back. Can you even imagine the humiliation of telling your friends and family that you caught the poop-out bus with less than six miles to go? Get out of your head. Enjoy the scenery.”

The course ran through a neighborhood now. Christie studied the brightly colored houses with their cactus and rock yards and imagined the families cool and comfortable inside. Of course, some of the families had braved the mid-morning heat and were standing in their yards, cheering the runners on. Just ahead a bearded man in cut-off jeans whooped as he waved a sign that said “Run like they’re almost out of beer!” A child extended his hand in anticipation of high fives. As Christie closed in on the group, a woman looked her direction and called, “You can do it; you’re almost there!” Christie smiled and started to jog. She slapped the small upraised hand and ran a little faster.

Of course, she could do this. She wasn’t going to set any speed records, but she wouldn’t come in last either. And when she was done, she would be a Marathon Runner. The fact that 12 weeks ago she couldn’t run a block without getting winded, and now she was in the final stretch of a marathon, was something to be proud of, not something to apologize for.

Her newfound enthusiasm carried her to the next aid station, where she gratefully accepted a cup of water from a smiling volunteer, who assured her the finish line was just four miles down the road. Christie’s hand trembled as she lifted the paper cup to her lips and half of the water dribbled down her chin. She accepted one more and dumped this one over her hat and wilted pony tail. It’s a good thing she hadn’t bothered with makeup this morning, but that finish-line photo was going to be something else. How did those runners in the magazines always look so sporty and happy crossing the finish line—not half-dead as she was sure to look? She had planned to hang her photo and finisher’s medal on the wall for all the world to see. Now she was thinking the photo would end up buried in a drawer somewhere. The medal was another story. Once they draped that over her neck, she might never take it off. She smiled, imagining it. “Oh this? This is my St. George Marathon medal. You didn’t know? I am a marathon runner.”

She smiled thinking of it. Twelve weeks ago a diehard running-enthusiast coworker had casually suggested she sign up for the St. George Marathon. When she’d laughed out loud, he’d said, “Seriously. You could do it, if you started training now.” The next day, he’d left a dog-eared paperback book, Run a Marathon in 12 Weeks, on her desk. She had picked it up and flipped through the pages with mild curiosity and no intention of actually doing anything with it, but as she read, she couldn’t help imagining herself in the role of runner: working hard, sweating, getting stronger, and then—BIG FINISH—running a marathon! Maybe she would give it a try—just for a week—then if she really hated it, she’d return the book, saying it just wasn’t her thing. No harm in trying.

That evening she put on her gym clothes and laced up her old tennis shoes and naively ran out the door for her first two-mile run. After one block, she was wheezing. After two, her legs were burning and her heart was pounding. At half a mile, she stopped in her tracks. She literally could go no farther, and she was pretty sure she’d peed her pants; though it was difficult to tell with the sweat dripping from every inch of her body. She turned around defeated and headed for home. Obviously, there was no way she was running a marathon; but there was also no way she was telling her coworker she couldn’t do it after just one day. She’d try again tomorrow, and every day for the rest of the week. She’d promised herself that much. After a week, she would return the book and gracefully bow out.

The next day—because there was no pressure—instead of running all out, she ran a block and then walked a block. That wasn’t so bad, so she did it again, repeating the process until she had completed three miles. She arrived home exhausted but proud. The next evening, she did the same thing, and the evening after that. Then, an amazing thing happened, each day she grew a little stronger, and by the end of a week, instead of returning the book, she’d bought a pair of real running shoes and traded in her flimsy cotton sports bra for one designed for high impact. After all, she was training for a marathon.

And now, here she was in the final mile. The spectators were thick along both sides of the road here, and sprinkled among them were racers, proudly wearing their medals and cheering on their slower cohorts. Their energy seeped into her tired muscles and she picked up the pace. She rounded a corner, and the sight of the finish line literally brought her to tears. Suddenly, she was sprinting, passing other younger, fitter runners who had given their all at the beginning, saving nothing for the long haul. Christie had paced herself, saved her best for last, and now she gave it everything she had. She crossed the finish line in triumph, smiling for the camera.